Last year HydroChem sponsored a series of technical seminars along the eastern seaboard. The seminars highlighted Sydney’s deadly summer and autumn of Legionella earlier this year and touched on some of the key factors that may have contributed to the numerous resultant Legionnaires’ disease outbreaks.

Join Clive Broadbent as he discusses the control and management of Legionella both here and abroad.

Watch the video or read the transcription below.

When there’s an outbreak of Legionnaires’ disease, there is a story of neglect. There’s a story of an error chain, in which it’s not one thing that’s gone wrong, it’s a whole series of things which have gone wrong.

Pretty well all the outbreaks in Australia and overseas have occurred in autumn. The theory that of advance on this and written in papers it seems to hold up, is that autumn is a particular time after summer of course has been the operation of the system on the hot days of summer, the warm days of summer, but operating pretty well full time. And then we strike autumn when systems can operate intermittently.

You can have a Mediterranean sort of climate that might be good one day, might not be good another day. There’s a seasonal change which sees the operation of systems starting and stopping one way or the other. There might be several cooling towers okay to get by with one, instead of two, or three, or four.

Well, they just don’t have as enough, as much water in them to ensure that there’s a stable chemical environment as to large systems. Large industrial systems have a very large quantity of water which makes for stable control. So any chemicals in the system tend to stay there.

There is what we call a holding time, or a holding time index, which might be several days with a very large system, so you can then be sure that the chemicals that are in the system are there for a long period of time.

With small systems, the same chemicals can be evaporated out of the system or discharged in otherwise, within a very, very tight time frame. Maybe 20 minutes or so, and you’ve lost all the water. You don’t actually lose it. It’s been replaced with nice water. But that also means the chemical environment is nothing like what it should be to be hostile to Legionella. So the small systems inherently have the very small volume of water, and add autumn to the mix, and we’ve got the potential to be more concerned at other times of the year.

The trend overseas in terms of providing risk management plans is to provide what they call a “Water Management Plan”. This looks at all the water entering a site, and where it is used. It’s especially relevant to hospitals where the water might be used in drinking water fountains, nebulizers, humidifiers, showering of course, basins, quite apart from cooling towers. And most hospital outbreaks overseas are due to these other systems and the vulnerable people. That aspect, in other words what we call “Host susceptibility” is especially a factor with a hospital.

These systems need to be managed, by include spa pools, decorative fountains, washer, car washer plant. There’s a lot of other facilities that inherently could cause problems.

I present as a hazard. I need to be managed. So a risk management plan should include these other systems and that is a trend that’s happening overseas, so called “Water Management Plans”.
In this country, I think we are, we will see this as what I call a sleeper. These systems in the future will dominate, because we’ve probably gone almost as far as we can with cooling towers, with what the industry will accept in terms of manufacturing details with the water treatment, that’s understood.

All of these applies to cooling towers and it’s pretty good to use. Over on the potable water side, where so many outbreaks overseas have occurred and a couple in Australia. We need to be a bit more sure and I think risk management plans should include those water systems as well. 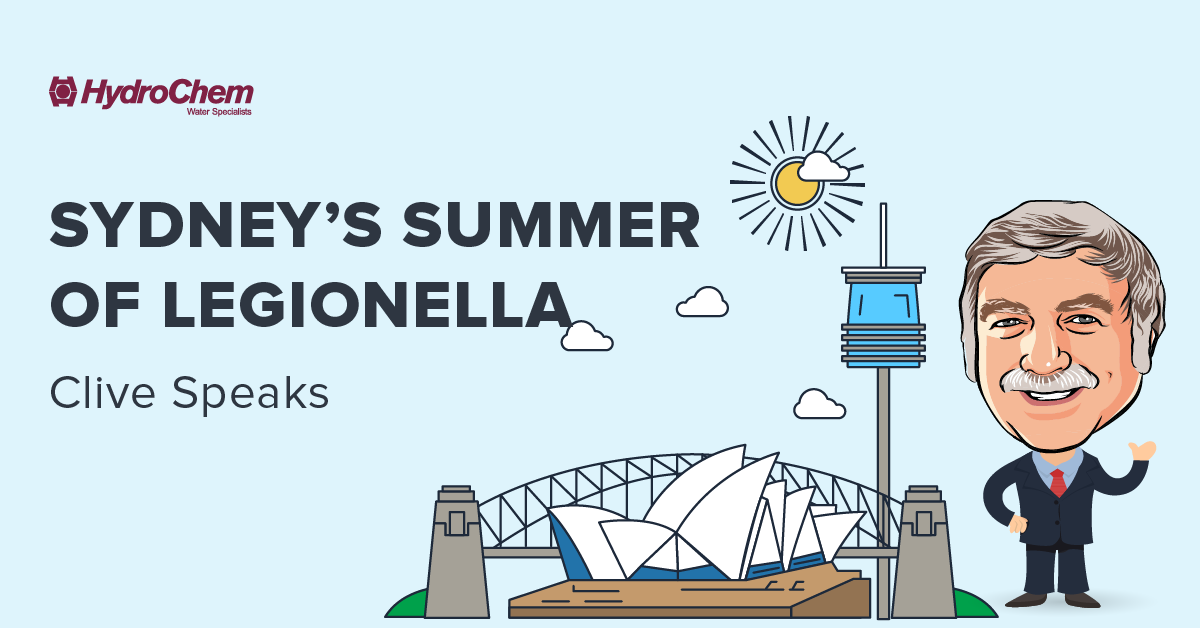