What is Legionnaires’ disease?

Legionnaires’ disease (Legionellosis) is a severe and potentially fatal form of pneumonia caused by colonisation of the respiratory tract with Legionella bacteria.

It is contracted either through the inhalation of water aerosols containing the bacteria or through aspiration (when contaminated water particles are breathed into the lungs while choking during drinking, ingesting or swallowing).

Legionnaires’ disease has a mortality rate of around 30%, and at particular risk are those over 50, and people with chronic respiratory conditions or chronic lung disease, heavy drinkers and smokers, diabetics, and people with weakened immune systems, or other diseases.

The first recorded outbreak of Legionnaires’ disease occurred in Philadelphia in July 1976, at a convention at The Bellevue-Stratford Hotel. 221 people became infected, and 34 died from the illness. Many of the victims in attendance were members of the American Legion, which is where the infection gets its name.

After some investigation, the source of the outbreak was determined to be the hotel’s air conditioning, releasing the contaminated aerosols. Although only identified several months after the outbreak, it is believed cases have been retrospectively identified as far back as 1947, and it is possible that people may have been contracting the illness for centuries without it ever having been diagnosed as the cause.

Where is the legionella bacteria found?

Legionella bacteria is naturally occurring in soil and water – harmless in low concentrations – but becomes a health risk when it is able to thrive and colonise, which it does in temperatures between 35-46 degrees C, or among the presence of algae or other organic matter, such as scale which can line the inside of pipes of a building.

Where do outbreaks occur?

Air conditioning cooling towers are commonly investigated as the source of outbreaks, and have been known to spread contaminated aerosols (known as drift) as far as seven kilometres, but other sources have included hot and cold water systems, humidifiers and whirlpool spas.

Recently, more focus has fallen on warm water systems after an increase of outbreaks in hospitals, apartment buildings, and aged care facilities. Think of the vast network of pipes and plumbing contained within any large building, and (if left untreated) how quickly pipes or pockets of stagnant water can become contaminated, and you will appreciate the countless corners bacteria can colonise.

Community-acquired pneumonia is so called because its source may remain undetected for some time. The source will still very likely be a hotel or other commonly shared building, such as a hospital, shopping centre, pool, tourist destination, etc., but a person may visit one of these places, contract the illness and return home, unaware they are ill until around 10 days later when symptoms of the disease begin to manifest.

Hospital-acquired Legionnaires’ disease refers to infections occurring within a hospital or aged care facility. Alarmingly, potable water has been identified as the source of almost all hospital Legionella outbreaks.

Legionella outbreaks pose a very real and ongoing threat, with cases occurring annually around Australia and the world. Australia’s highest number of notifications was in 2013, reaching 508, with more than half of those occurring in Queensland and New South Wales. 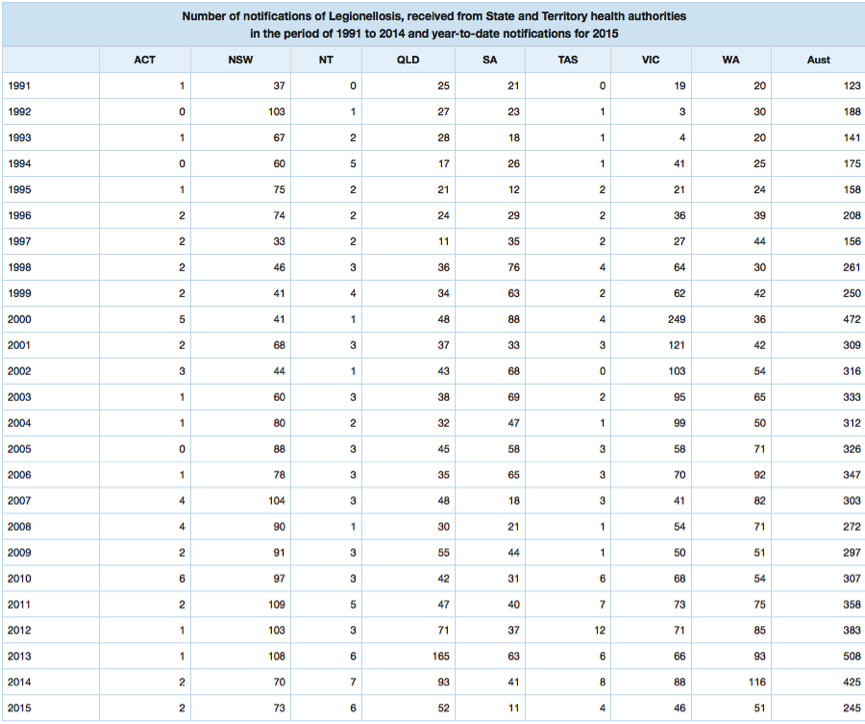 In 2015, the CDC has reported an increase in Legionella outbreaks across the US, with infections in August of that year doubling what was anticipated, based on statistics from the previous five years[1]. 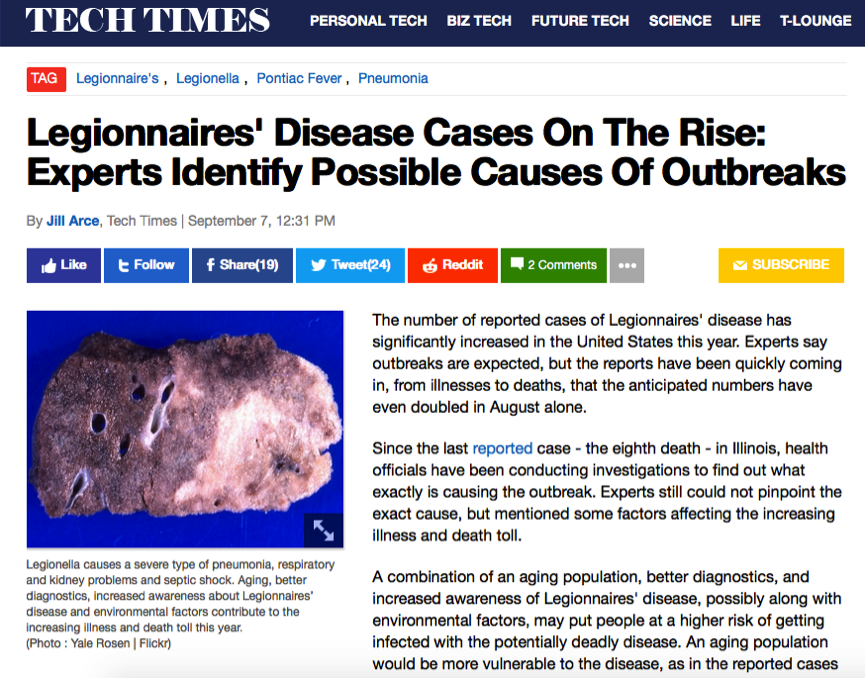 Outbreaks are always expected, particularly during the warmer months due to the ideal conditions created in warm water systems. An aging population and enhanced methods of detection has also been linked to the increase, but unfortunately does little to prevent the infections.

Legionella infection has an incubation period of between two to ten days before symptoms manifest and authorities and facility operators are made aware of an outbreak. The August 2015 outbreak in New York’s South Bronx was the worst outbreak in the city’s history, leaving 12 dead and more than 120 infected.

If nothing else, the rising numbers highlight the importance of having effective preventative measures in place to detect and treat health and aged care facilities.

HydroChem: Water Treatment services you can depend on

To discover how we can help with Legionella prevention and Risk Management, have a chat with one of our consultants today.